Home » About the Company » Factory History

When the World War II began under the order of the Government of the USSR in Sverdlovsk they decided to create a factory for the production medical instruments. It was named “Factory No.16”. The first regulation of the factory was approved on October 7, 1941. Four months later, the equipment was installed, and the factory began to produce surgical equipment: scalpels, tweezers and clamps.

At the beginning of January 1942, by the order of the Deputy People’s Commissar of Health of the USSR, the syringe department No. 1 was separated from the factory into an independent “Factory No. 18”.

The main objective of the Sverdlovsk Syringe Factory was the production of syringes and needles for them.

The Sverdlovsk Medical Instrument Factory first of all produced medical instruments, and at the end of the war the factory had already produced over 35 items of medical instrument. In 1949, the factory has been transformed to the production of physiotherapy lamps and medical chairs. Among the first products of this profile were “Solux” lamps, infrared rays, mercury-quartz lamps, and etc.

After the merger, the syringe and needle production continued until 1955.

In 1956, under the order of the Ministry of February 1, 1956, due to the fact that the Factory was completely profiled for the production of lighting and electromedical equipment, it was named “Sverdlovsk State Union Factory of Electromedical Equipment” (Sverdlovsk Factory EMA).

By 1956, the factory began to completely specialize in the production of lighting and electromedical equipment (operating lights, physiotherapy devices, bactericidal irradiators, etc.)

In 1997, the Sverdlovsk EMA Factory was transformed into the Closed Joint-Stock Company “Electromedical Equipment Factory”. 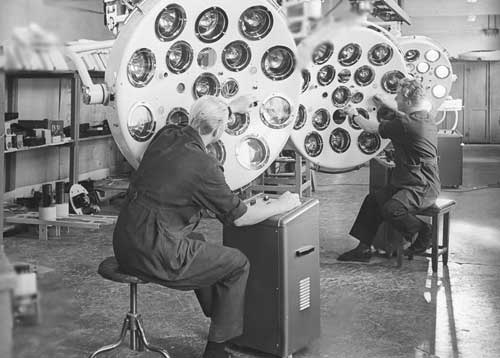 Nowadays, our company is dynamically developing. We are using innovative solutions and specializing in the production of medical products in three main areas:

We are leaders among manufacturers of LED medical lamps in Russia, the CIS countries and the world. Our luminaires are in high demand not only in the Russian Federation, but also exported to 62 countries of the world. This had been possible because of excellent quality, well-established service and compliance with all requirements for medical devices.